If you’re travelling across New Zealand, chances are you’ll be passing through Wellington at some point. While lots of travellers spend only little time here before they hop on the ferry to the South Island, I discovered that the capital makes for a great city trip destination. However, I also discovered that it’s notorious for its bad weather. Not only does it rain A LOT there, but Wellington is also the windiest city in the world. Yet, even on a rainy day there’s still plenty to do and to see here. Looking for things to do in Wellington when it rains? (which is often) Here you find my top 5 cultural things to do in Wellington, suitable for rain or shine!

What to do in Wellington when it rains?

Where Middle Earth comes to live!

We arrived in Wellington after a short morning flight from Rotorua. During my research on New Zealand, I had read many times that it’s not unusual to experience all four weather seasons within one day. Despite these warnings, I didn’t quite expect to arrive in completely different weather conditions after just a 1-hour domestic flight. From summery Rotorua we arrived in autumnal Wellington where it was absolutely pouring down from the moment we caught sight of the city from the plane. And I can tell you that there’s absolutely no point in putting up your umbrella. (Unless you’re Mary Poppins of course and can fly in the wind.)

Luckily, I had booked a tour through the Weta Cave film studio for our first morning in Wellington. The company might have once started in a spare room of the founders’ apartment, but today it’s one of the world’s leading film studios. The studio (no longer located in the apartment by the way) doesn’t only make puppets and props for lots of famous films, but they also specialise in special effects and animatronics. Their portfolio includes blockbuster films such as The Lord of the Rings, The Chronicles of Narnia and Ghost in the Shell. It’s clear that Weta Cave is an absolute must for film buffs. So, hubby and I clearly had to go check it out!

The studio offers a range of different tours, and we opted for the Weta Studio Tours Combo. This tour first took us through the workshop where we could see the professionals at work. It also offered us the unique chance to see (and sometimes even touch) authentic film objects from up close. During the second part of the tour we got an exclusive look behind the scenes of the iconic TV series Thunderbirds.

What do you when your tour guide asks for volunteers to hold a life-size sword? Immediately put up your hand in the air, right? That’s just exactly what I did when we were asked that question at the beginning of the tour. Little did I know that they meant to carry it for the entire 45-minute tour! That will teach me to be such an eager beaver, haha!

Our guide shared tons of fascinating trivia and entertaining anecdotes with us. One of the most memorable stories was the one about how Viggo Mortensen was arrested during filming The Lord of the Rings: The Fellowship of the Rings. In order to fully immerse himself in his character of Aragorn, he would wear his full costume outside of the film set. Remember, this was during the filming of the first LotR film so no one quite knew the films nor Viggo’s now-famous character yet. So, imagine seeing some random guy with greasy hair, clad in a full chainmail suit whilst carrying around a sword. Yes, sounds rather suspicious, right? That’s why the police arrested poor Viggo who was merely trying to do his job best as he could!

Not sure if a studio tour is worth it? Don’t hesitate, but just go for it! Trust me, it’s worth every penny!

Wander around for hours in this immense museum!

You could easily wander around for hours or even days in this huge museum. It therefore makes for the perfect activity on a rainy day in Wellington! The full name of the museum, Te Papa Tongarewa, is ‘container of treasures’ which is definitely not exaggerated. The museum treasures are spread over six floors and reveal anything you might have ever wanted to learn about New Zealand. Whether it’s Maōri culture, the famous Kiwis or the world’s only complete specimen of a giant squid, you’ll be able to find it all here in Te Papa!

I was mostly intrigued by the interactive displays in the geology section. These gave me a good idea of how the country’s characteristic landscape has been created by series of earthquakes and volcano eruptions in the past. But it also made me realise why the country is still under constant threat of natural disasters. During our New Zealand trip we witnessed the devastating effects of such disasters in recent years. The 2016 Kaikoura Earthquake forever changed the town’s landscape while the deadly 2011 Christchurch Earthquake indirectly initiated a flourishing street art scene in Christchurch. Fortunately we didn’t experience anything scary ourselves, but the Earthquake House in Te Papa did give us a good idea of what it’s like to experience an earthquake.

One of my personal favourites was the floor dedicated to the art and culture of the Maōri and surrounding countries. Like in so many other places in New Zealand, the information is written in both English and Maōri and I find the way they talk about the indigenous culture here very respectful. Although this hasn’t always been the case, I’m glad that Maōri culture is very much incorporated in the country’s identity. You’ll notice that when you visit museums, attractions or nature parks, there will usually be some reference to Maōri culture.

I’m no hardcore hiker by all means, but I’d be happy to walk this trail several times! With its numerous microbreweries dotted around the city, it’s no surprise that Wellington is also called the Craft Beer Capital. And the good news is that you can sample these delicious craft beers in one of the city’s many cool bars!

Now, if you are a ‘normal’ person, then you’ll probably be just perfectly happy to order a beer at the bar and simply enjoy your drink. However, if you are a ‘nerd’ without any shame like myself, then you’d want to ask the bartender for the Beer Map. Chances are that they’ll just stare at you and have no clue what you’re on about. (This proved to me that not many people ask for this magical map.) The idea of the map is that you get a stamp in it after ordering a drink at one of the participating venues. ‘Hiking’ the beer trail will require walking through the rain at times when you go from one bar to another. But, if you take this venture seriously, you wouldn’t care less about getting wet after a certain while. Cheers!

Besides travelling and eating, there’s nothing more I enjoy more than watching films. I watch a film almost every day, rain or shine. When I’m travelling I usually watch films on my laptop in the confines of my hotel room or apartment. However, when I get the chance to visit a good theatre such as the Lighthouse Cinema Cuba, I’m more than happy to join the locals for one of my most favourite daily activities.

You can find this laidback film theatre just off Cuba Street, Wellington’s most lively street. In the super comfy screens you can see both arthouse films but also good blockbusters. Not in the mood to watch a film? You can also come here to warm up with a fresh cup of coffee or enjoy a craft beer in an artistic atmosphere. In conclusion, Lighthouse Cinema Cuba is the perfect location to hide from the rain!
Tip: buy your tickets in time because screenings can sell out quickly, even during the day. (I know this from experience.)

Are you also such a vinyl junkie? Well, you’re in luck because Wellington is a great place for vinyl lovers! I found several record shops there, but my favourite one was Slow Boat Records. This coincidentally also happens to be New Zealand’s oldest record store! The huge collection in this music Valhalla will easily keep you entertained (and thus dry!) for hours at end. Whether you’re into rock, electro, jazz or world music, chances are you’ll find that perfect gem for your record collection hidden inside one of those numerous crates.

And I’m not the only one who’s mad about Slow Boat Records. Record label Vinyl Factory even included this shop in their list of the best record shops in the world. According to them this shop is also a popular shopping destination among celebs such as members of Radiohead and Beastie Boys. But also Martin Freeman and Noel Gallagher are known to shop here when they’re in town. So who knows whom you might bump into during your record-shopping trip here!

Want to see some more free Lord of the Rings and Hobbit sights? Then head out to Wellington International Airport for an alternative sightseeing tour. Don’t get scared when you get face to face with a life-size version of Smaug the dragon (at the top of this article) because Gandalf and his Great Eagle aren’t far away! I also found great photos of a gigantic Gollum in the food court online and a Hobbiton recreation at one of the baggage belts. Enough to do and see even at the airport then!

Not finished reading yet? Find all my New Zealand articles here.

Have you ever been to Wellington? What was your favourite thing to do there? Or do you have any good tips for things to do in Wellington when it rains? Please share them here!
Zarina xx

Save these five things to do in Wellington when it rains on Pinterest! 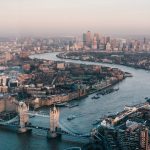