A few years after the deadly 2011 Christchurch earthquake, street artists and graffiti writers took to the damaged streets of Christchurch. Traditionally associated with vandalism, the goal of this art initiative was to fill the streets with colour, joy and optimism. And now almost a decade after the destructive event, Christchurch has grown into one of the world’s street art capitals. One of the big forces behind this is the street and graffiti art production organisation ‘Oi YOU!’. Read on to get a taste of the outstanding Christchurch street art scene.

Some people choose their holiday destination based on the weather, local nightlife or number of Michelin restaurants. For me the decisive factor is the presence of street art.

Truth be told, when I was putting together the itinerary for our first New Zealand road trip, I didn’t plan on including Christchurch first of all.

It was just that I had my heart set on traversing New Zealand’s majestic landscapes rather than spending time in cities. Until I discovered the great amount of street art in Christchurch, that is. After that I suddenly found myself very eager on visiting the South Island’s largest city! So, I booked us into an apartment for a couple of nights and scheduled in a whole day of exploring Christchurch’s urban canvases.

As you can see from the eye-catching giant spray cans in the photo below, these urban canvases are very diverse indeed. Located next to a basketball court on the corner of Manchester and Lichfield streets in the city centre, there are eight oversized spray cans in total. Three of them are long-term works painted by professional artists. The remaining five are freely available for local aspiring artists with the aim of creating an ever-evolving public art project.

I’m fortunate to live close to Shoreditch, a London neighbourhood famous for its outstanding street art. This has introduced me to some of the world’s best street artists. I recognised the works of some of my long-time favourite artists in Christchurch such as the Belgian ROA and Australian RONE, both highly respected names in the international street art scene.

But the great thing about travelling, especially to the other side of the world, is that you discover new things to get excited about. Such as the works of Jacob Yikes and Wongi “Freak” Wilson. These are both incredible New Zealand artists who have played a significant role in the post-earthquake transformation of the city.

Here’s a small selection of the murals I came across in Christchurch’s city centre.

Mural by ROA on the Canterbury Museum

As mentioned earlier, ROA is at the top of my all-time favourite urban artists. One of his large-scale murals has even become an icon of East London’s street art neighbourhood of Shoreditch. But seeing his wall paintings whilst travelling is always a special treat!

ROA painted this mural on the Canterbury Museum (Rolleston Avenue) during the 2013 Rise festival. It represents two native birds to New Zealand: the now extinct moa and rare kiwi. I kept seeing signs for kiwi zones during my several hikes across New Zealand, but I think this mural is the closest I’ve got to actually seeing one.

More street art in Sydenham, an inner suburb of Christchurch

The thing about following street art trails is that they often lead you to remote industrial areas. I did end up in such an area, but entirely by chance as we followed a tip from a friend who recommended a visit to Penny Lane record shop. This was located in Sydenham, an inner suburb of Christchurch and about 1.5 kilometres from the city centre. Unfortunately, we weren’t to pick up our rental car till the next morning. However, always in for an adventure, Hubby and I ventured to the record store by foot. And that was actually very lucky as this allowed us to discover some great street art and graffiti in the area.

I didn’t use a street art map at the time, but found some locations online before our trip. But as you wander around town, it’s hard not to come across any street artworks!

However, once I got home I wanted to look up the artist names. That’s when I found a great interactive street art map called Watch this Space. Besides photos of the artworks it also gives you the exact locations for them, together with the artist names and their bio (plus social media handles). And if applicable, it also gives you some background information on the project or festival it was part of. Even if you’re not searching for street art locations in Christchurch, it’s worth checking out the website as it contains some amazing artworks!

The changing streetscape of Christchurch

Ironically Hubby and I returned to Christchurch a year later for yet another epic New Zealand road trip. This time my street art hunt was limited to our route from the apartment to the car rental. It was curious to see all the new building work that had gone up in those twelve months’ time.

Most of the street artworks had stayed the same, except for the three spray cans which had been renewed. Sadly, the Anthony Lister artwork in the photo above had disappeared as the wall was painted over by the property developers. Although this is a great loss, it’s also a reminder of the common fleeting nature of graffiti and urban art. I’m looking forward to my next visit to Christchurch and see how much more this resilient city has emerged from the debris.

Do you go on street art walks when you’re travelling? I find that following street art trails often leads me to surprising parts of town. What is your experience?
Share your thoughts in a comment below.
Thanks! Zarina xx

Want to discover more surprising street art destinations? Then have a look at these articles: 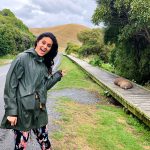 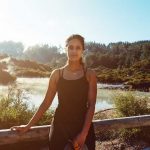