Located in the gorgeous ancient city of Bath, England, the Roman baths are the ultimate British bucket list item. It’s quite astonishing that after 2,000 years, the Roman Baths in Bath remain one of the top tourist attractions in England! In this blog I tell you what there’s to see and share some tips to help plan your own visit.

This article contains affiliate links. Please refer to my Disclaimer page to learn more about this.

I never expected my morning at the Roman Baths to start with a police chase.

While waiting in line to enter the Roman bathhouse, I witnessed officers pursue the suspect of an imagined crime. Because the thing is, it was all staged.

Speaking of an anti-climax, right?

Well, in my defence: how often do you see a film crew shooting a thrilling new drama series?! I briefly considered auditioning for a role there and then, but didn’t want to lose my spot in the (short) queue.

I might’ve sabotaged my own breakthrough on national TV, but I had to focus on the main goal for my one day in Bath: to visit the Roman baths! And to ensure I didn’t have to share this long-held experience with dozens of other tourists, hubby and I arrived at 9 o’clock sharp.

When is the best time to visit the Roman Baths in Bath?

The best time to visit the Roman baths is either immediately after opening or two hours before closing time. If you want to avoid the tour groups, don’t go to the Roman baths between 11am – 3pm! The opening and closing times vary per season. Check the official website of the Roman Baths for the exact times. For more practical information about your visit to the Roman Baths in Bath, please scroll down to the bottom of this blog.

Are the Roman Baths in Bath worth a visit?

I can be very brief about this: YES! My visit to the Roman Baths was truly fantastic.

I couldn’t stop thinking how incredible it was to be able to wander around such a huge building complex where the Romans came together almost 2,000 years ago (!) to swim a few relaxing laps, gossip with each other and be pampered.

Related article: How to spend one day in Bath

What is the history of the Roman baths in England?

The original Roman baths were built around 60-70 BC. But it was more than a bath and spa complex for the Romans though. It was a significant place of worship for them. Why?

When the Romans first came across the bubbling hot springs during their English invasion, they had only one logical explanation for this.

This was the work of the gods.

But they weren’t particularly original in this. Because the bubbling mineral-rich water was already considered as a healing source by the Celts who lived here long before the Romans. And that’s why the Celts had dedicated the sacred location to Sul, goddess of spring, fertility and healing.

Although the Romans had their own set of gods they believed in, they didn’t want to offend the local tribe and the Celtic goddess too much. I guess you can’t be careful enough! For this reason they invented a new goddess especially for this occasion: Minerva Sulis.

This special hybrid-goddess was a combination of the Celtic goddess Sul and the Roman goddess Minerva, goddess of wisdom.

The Romans built a large spa right on top of the thermal springs. It included a temple dedicated to Minerva Sulis which had the Sacred Spring right next to it.

The Romans believed this sacred source was a direct line to Minerva Sulis and therefore left their sacrifices there.

But they also came here to throw lead curse notes into the water. On these notes they usually wrote about a terrible injustice they had suffered and cursed the perpetrator.

And do you know what those horrible things were that the Romans complained about to Minerva Sulis?

Most often the theft of their clothing while they were bathing.

Really, how annoying is that?

But thieves sometimes stole more than just clothing. The author of the note below curses the person who stole Vilbia, who was probably a slave.

May he who carried off Vilbia from me become liquid as the water. May he who so obscenely devoured her become dumb.

There are a few of these curse notes on display in the Roman Baths. And personally, those were truly one of the highlights of my visit.

Because when you think of Romans, you usually think of a highly developed and sophisticated civilisation, right?

So whilst reading those curse notes in the Roman Baths it was quite refreshing to discover they also dealt with very mundane issues such as petty thefts.

I also found it rather comical that they didn’t only complain about the perpetrators, but even went one step further by officially cursing them and asking Minerva Sulis to punish them!

I can’t help but think those curse notes were the ancient version of Twitter where people tend to complain about everyone and everything. (Yup, I’m guilty of that too!)

What can you see at the Roman bathhouse?

The large bath (Great Bath) is by far the highlight of the entire bath complex, but the ancient holy spring (Sacred Spring) is just as impressive. Unfortunately these baths with their bright green alga-filled water are no longer suitable for swimming.

If you’re interested in bathing in the famous thermal springs of Bath, you’d have more luck at the Thermae Bath Spa.

In the other baths you get an idea of their original usage and appearance from the projected video reconstructions. They show you for example how they utilised the thermal water to heat up the sauna rooms.

But do you know what I was mostly excited about?

The ingenious sewerage system originally constructed by the Romans!

I know, my interests are a bit peculiar at times, but it’s quite incredible to see how clever those Romans were. Their building skills were really unparalleled!

Besides the various bath and sauna rooms, there are also a number of rooms in which you can admire countless excavated antique objects. In addition to the curse notes, you will also find hundreds of coins, masks, tiny amulets, gravestones and much more.

And thanks to the large-scale model of the temple and the bathhouse complex you get a good idea of how glorious it must have looked like in the time of the Romans.

What happened to the Roman ruins in Bath?

When Roman rule came to an end in England in the 5th century, the bathhouse also fell into disrepair. Due to flooding of the River Avon, everything was buried under a thick layer of mud and parts of the building collapsed.

The Roman ruins were buried underground for hundreds of years. Yet the thermal springs of Bath still attracted large groups of people because of their supposed medicinal qualities. It was really the place to be among the British elite and even celebrated author Jane Austen lived in the city for some time.

From the 18th century, doctors started to prescribe the thermal water as a remedy for various health problems. The first Pump Room opened in 1706 from where visitors could tap water directly from the thermal springs via a water pump. Nowadays the Pump Room is a restaurant next to the Roman Baths.

Slowly Bath changed into the elegant city it is today with the construction of hundreds of stately Georgian buildings. Yet it took another century before the Roman Baths were discovered. The baths have been open to the public again since the end of the 19th century.

And today, after several years of renovations with an investment of £5.5 million, the Baths are guaranteed to be experienced by generations to come.

Our visit to the bath and sauna complex took almost 2 hours. Impressed by the building ingenuity of the Romans, we concluded our visit with a glass of warm spring water.

Well, let’s say the opposite of a refreshing glass of water … and I won’t be rushing back for a refill.

Despite the unpleasant conclusion, our visit to the Roman Baths exceeded all my expectations. And I was equally impressed with all the other things the city of Bath had to offer.

Curious to see what other fantastic things you can do in Bath? Then continue to read my ultimate 1-day itinerary for Bath!

Special opportunity for my readers!
Join a fantastic 1.5-hour walking tour in Bath with a professional guide and explore the main UNESCO World Heritage Sites in Bath, England. This deal includes your skip-the-line entrance tickets for the Roman Baths, Fashion Museum and Victoria Art Gallery.
Take advantage of this offer now!

How much time do you need at the Roman baths in Bath?

Allow 1.5-2 hours for your visit.
We purchased our tickets online the night before and downloaded them onto our smartphones. Although it was in the middle of the high season, there were still enough tickets available for our desired time slot.
Upon arrival you receive a free audio guide from which you can chose from several languages. The great thing about the audio guides is that there are different themes. You can opt for fragments narrated by author Bill Bryson or the special audio tour for children.
Not in the mood for an audio guide, but do you want more background information? Then you simply join a free English-language tour. From 10am there’s one every hour departing from the large bath (Great Bath) on the ground floor.

How busy is it at the Roman Baths?

Considering we went there in the middle of summer, I expected huge crowds. And although it was fairly busy, it was actually not too bad. We walked past the Roman Baths several times that day (Bath’s city centre is very small) and never saw long queues outside. But as I suggested at the beginning of this article, I recommend avoiding visiting during the popular tour group times.

How to get to Bath, England?

From London Paddington you can be in Bath in 1.5 hours by train. But you can also combine your visit to Bath with a city trip to Bristol. From Bristol, it’s only 10 minutes to Bath by train. Check the best prices and train times here.
Rather drive to Bath? Find the best deal for a rental car here.

Sharing = caring ♡
Liked this article about the Roman baths in England? Then pin it for later! 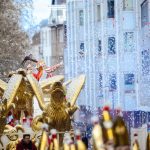 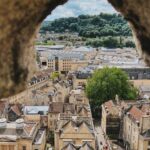