Looking for a day trip in the Netherlands to somewhere that isn’t Amsterdam? Then charming Den Bosch in the south of the Netherlands might be just your perfect destination! The capital of the North-Brabant province is famous for its outstanding restaurants and vibrant bars. But it also makes for a true paradise for shopaholics and culture vultures alike. It’s not surprising Den Bosch is also called the Southern City of Culture. When wandering around the picturesque streets filled with stately mansions, you’ll notice this centuries-old city simply oozes culture. Looking for things to do in Den Bosch? Find the answer in my Take Five about Den Bosch! In this series I always share my favourite record shop, cinema, bookshop, music venue and museum in a certain city with you.

When I was young, I dreamt about living in Den Bosch

It’s funny how I appreciate the beauty in Dutch places more now since I moved to England – over 7 years ago now! Amongst those beautiful Dutch places I definitely count the cities of Den Bosch and Tilburg, which to me both still feel like home.

As a teenager I used to cycle 17 kilometres to my school in Den Bosch for 6 years. My thighs are testimony that! And even when I went to Uni in Utrecht, I always dreamt of living in some stunning villa in the centre of Den Bosch one day.

I could imagine myself relaxing on the sofa on Friday nights after a busy workweek, glass of red wine in hand. Because fancy people obviously live in Den Bosch – also called ‘s-Hertogenbosch – and drink red wine. Apart from the red-wine-drinking, my grown-up dreams never came to fruition. But even though I might be living abroad now, I still visit Den Bosch every couple of months. I then always make sure I drop by one or more of these following places for a good dose of culture. And perhaps even a glass of red wine! (Or rather a Belgian beer because I’m not really that fancy…)

Take Five: 5 cultural things to do in Den Bosch

Perched at the edge of the city centre, you’ll find Verkadefabriek. (Website only in Dutch.) In the past they would bake Verkade biscuits, but nowadays visitors come to the former factory (fabriek in Dutch), to see a film, theatre piece, dance performance or concert.

Verkadefabriek has two theatre rooms, a magnificent café-restaurant with large outside area and five cinema rooms. While this is not the only cinema in Den Bosch, Verkadefabriek differentiates itself from the other cinemas by showing mostly arthouse films.

I still remember when this culture complex opened its doors in 2004. Prior to this, visitors wouldn’t have much reason to come to this part of the city. It was mostly a former industrial area where little happened. But partly thanks to the success of Verkadefabriek, this part of town has transformed into a vibrant cultural area!

From Verkadefabriek it’s literally only a few steps to yet another impressive factory-turned-cultural-venue: Willem Twee. (Website mostly in Dutch.) After being abandoned for years, the former cigarette factory re-opened its doors as a music venue in the 1980s already.

Their diverse programme offers anything from rock to world music to dance. I’ve seen many concerts here since my teenage years and spent many nights dancing till the early hours during their club nights. Little did I know at the time, I would later do an interview here with a member of the influential British electronic music group 808 State!

Besides concerts, you can also visit Willem Twee for art. In their two gallery spaces kunstruimte and spiegelzaal they organise around 20 exhibitions a year. And if, like me, you’re interested in modular synthesizers, you can even rent their impressive analogue music studio for a few hours!

Maestro’s Records in Den Bosch is far more than just a recordstore. Vinyl lovers could easily spend hours here, digging through the crates of records. But the laid-back atmosphere makes the record shop similarly inviting for less hardcore vinyl enthusiasts.

> Things to do in Den Bosch? Save these cultural tips on Pinterest!

Boekhandel Adr. Heinen has been selling books in Den Bosch for over 100 years already. This shop therefore makes part of local history! I’ve always had this special attraction to this bookshop, ever since I was a little girl. Not only because I loved books so much, but mostly because of its special children’s entrance, with a door made especially at the height of young visitors. This entrance leads you straight into the children’s and youth book section. Isn’t this clever?

The total collection of book shop Boekenhandel Adr. Heinen is spread out over six floors, connecting with one another via charming creaking staircases. If you’re a book lover, I recommend setting aside a few hours for your visit to this bookshop during your day trip to Den Bosch! And don’t worry, there’s an English language section there for those struggling with their Dutch.

Art and culture lovers will have the time of their life, because Den Bosch is home to 50 museums and galleries! Some of the gems include the Design Museum Den Bosch, Jheronimus Bosch Art Center and the National Carnival Museum. However, from the wide array of museums, I think Het Noordbrabants Museum must be my favourite.

This museum received worldwide fame overnight in 2016 thanks to their blockbuster show Hieronymus Bosch: Visions of a Genius. This exhibition marked the 500th anniversary of the death of without a doubt the most famous citizen of Den Bosch in history: painter Hieronymus Bosch. For the first time in centuries, almost all paintings briefly returned to the birth town of this prolific and influential painter.

Also their current exhibition about yet another world-famous North-Brabant painter, Vincent van Gogh (till 12 January 2020) promises to become a worldwide hit. Besides classical painters, Het Noordbrabants Museum also showcases (inter)national modern art, as you can see in the photo below.

Now you know about the things to do in Den Bosch, but how do you get there?

Take the train to Den Bosch

All these cultural tips I shared with you in this blog are in walking distance from Den Bosch Central Station. When you leave the station, it’s a short walk (in a straight line) to the city centre. The city is well connected with the rest of the country by train. There are frequent direct trains from Den Bosch to Amsterdam, Utrecht and Schiphol even. But you can also take a direct train from Den Bosch to Eindhoven, Tilburg, Breda, Weert and Maastricht.

Prefer travelling by car and wondering where to park in Den Bosch? There are several parking areas and garages in and around the city centre. You can find more information on this website: Parking in Den Bosch. 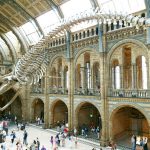 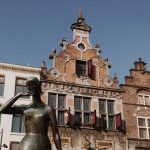