Occupying the riverside district slightly southwest of the city centre, the artistic neighbourhood of Soho is home to the best street art in Málaga, Spain. Featuring murals by some of the world’s top urban artists as part of the street art project MAUS, Málaga is not to be missed by street art lovers!

From 2013 the city of Málaga has been offering its walls to street artists from all over the world. That’s when they started their prestigious art project MAUS, short for Málaga Arte Urbano Soho. By doing this, they’ve transformed the rundown riverside neighbourhood of Soho in a fantastic open-air street art museum where torn down walls now function as urban art canvasses.

Prior to my visit, I didn’t know there was street art in Málaga. So, you can imagine my big surprise to find the abundance of jaw-dropping street art there! And not only as part of MAUS, but also lots of great murals that weren’t commissioned but are allowed by the city council anyway. The majority of them are located by the river bed as you can see in the photos below.

It’s fantastic to see that MAUS Málaga managed to get the crème de la crème of the world street art scene to their city. I couldn’t believe it when I found the larger than life murals by some of my all-time favourite street artists here! It’s always a joy finding murals by artists such as ROA, DALeast, Faith47, D*Face and Shepard Fairey, but it feels even more rewarding when it’s unexpected. Especially in such a quiet and rather small city such as Málaga. And being in Spain, it was also a great opportunity to get acquainted with Spanish street artists.

Since my visit in 2015, only a few new murals have appeared as part of MAUS Málaga. So this overview is still pretty complete (as of summer 2020). Here are my favourite street art pieces to be found in Soho and beyond. And to help you locate the murals, I’ve included the addresses too. Don’t forget to consult the free MAUS Málaga street art map if you’re planning a trip!

Explore Málaga with a local guide in a unique way and book one of these special activities:
Creative Urban Photography Workshop: improve your photography skills whilst discovering the best spots urban hotspots in Málaga
Professional Photoshoot and City Tour: combine an intimate city tour with a photoshoot by a professional photographer

Award-winning Spanish street artist Andi Rivas is a fine arts graduate and now specialises in graphic art. You can find his bold graphic artwork on the side of the Parking Calle Alemania. I wonder what the nuns in the photo made of this colourful piece.

Based in Madrid, graffiti and muralist collective Boamistura have received worldwide recognition for their bold artworks. Their works have even been showcased at respectable museums such as the Reina Sofia National Museum in Madrid. Besides graffiti and mural paintings, this multidisciplinary group have also collaborated with interior designers and architects.

Local Dadi Dreucol is one of the Spanish street artists I was pleased to discover during my urban art explorations in Málaga. Starting graffiti writing at the age of 12 already, he went to study at the Málaga School of Fine Arts. Today Dreucol’s urban art seems to always feature the same character as seen below. Symbolising ‘human beings’ existential essence’, the bearded half nude man is free from all the rules set by society.

It’s interesting to see the contrast between the rather serious and philosophical mural by Dadi Dreucol above and the more playful street art by him below.

In the feature image at the top of this post you see an amazing mural by one of my favourite artists, DALeast. And because I love his work so much, here’s another photo of his murder of crows from a slightly different angle.

Born in China, you can find DALeast’s epic murals all around the world. Usually depicting animals made of scraps of metal and rubber, his impressive monochrome murals always have a sense of urgency to them. In Dunedin I happened to come across another fantastic mural of a Haast eagle by DALeast. Click here if you want to see more of his amazing wall paintings!

I don’t think I’ve seen the works of British street artist D*Face outside of London, the city I got to call home after I migrated from the Netherlands and where I got infected with the street art bug. Seeing his large mural, echoing the famous pop artist Roy Lichtenstein, was therefore very special.

And as a bonus, I also found this smaller stencil artwork by D*Face on Calle Casas de Campos!

Not far from DALeast’s stunning mural, his former partner Faith47 painted this enormous piece. I adore everything this amazing artist from South Africa creates and I wish I could see more of her epic work in real life rather than in her Instagram feed. As a coincidence, I also saw another great painting by Faith47 in New Zealand as part of the amazing Dunedin street art trail.

In this painting below you see a group of, I suspect, men dressed in green Semana Santa costumes. These hooded cloaks are typically worn during the Holy Week processions. Predating the Easter weekend, Semana Santa lasts for a week and is the biggest event in Spain!

From all the Spanish street artists I got to know from our trip to Málaga, I think Pejac was my favourite. Another fine arts student, Pejac uses multidisciplinary techniques. I thought this meta-wall painting of a man painting a wall was really clever and well executed.

Despite liking Pejac’s wall painting very much, I was far more excited to come across this large mural by Belgian street artist ROA, one of my top favourite street artists. His monochrome murals are usually truly gigantic and most often portray animals. What I like most about ROA’s paintings is that they look like pen drawings. But you know by looking at their size, there’s no pen in the world big enough to produce such enormous artworks!

I’m lucky to have seen numerous of ROA murals over the years, from London to New York City. However, I’d very much like to make a special urban art trip to his hometown of Ghent in Belgium one day in search of ROA artworks.

ROA painted a second mural in Málaga a bit further down Calle Casas de Campos (right next to the smaller D*Face stencil artwork). This painting of a chameleon is considerably smaller than the mural you see above, but the quality of this painting is still very impressive.

This colourful wall painting by American artist Shepard Fairey is located right next to the large D*Face mural. Having been active for thirty years now already, I think Shepard Fairey is one of the most iconic street artists around. Starting with a sticker he made as a 19-year old art student based on a portrait of the wrestler André the Giant, Fairey would end up designing the iconic Obama presidential campaign poster almost twenty years later. Being a successful commercial artist, people sometimes calll him a sell-out but after having seen his 30-year anniversary show in London I still appreciate Shepard Fairey as a great artist.

Below you see a stencil artwork by Shepard Fairey on Calle Casas de Campos. It’s his iconic portrait of wrestler André the Giant, the sticker design that once kickstarted Fairey’s remarkable career as a street artist and designer.

Besides commissioned artworks, MAUS also offers so-called ‘free walls’ up to artists. Below you see a small selection of those works. I wasn’t always successful in identifying the artists but added them wherever I could.

My favourite would be the mural by Jack Fox of the man with extremely large arms. In the close-up photo of the artwork, you can see how detailed it actually is.

Which of these street artworks in Málaga is your favourite?
Let me know in a comment below!
Thanks, Zarina xx

Want to discover more surprising street art destinations? Then you might be interested in the following articles:

Save the best of the Málaga street art on Pinterest 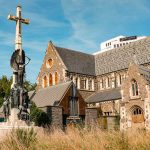 Best Things to Do in Christchurch, New Zealand Itinerary 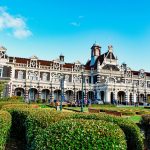 Top Things to Do in Dunedin, New Zealand: 3-day Itinerary