Looking for fun tips for your first (or umpteenth) visit to London? After five years of blogging on dutchgirlinlondon.com I have collected a fair share of insider tips I am eager to share with you. This blog post is part 2 of my 3-part city guide with things to do in London. Use this guide to get the most out of your visit to Europe’s most vibrant city!

>Your ultimate guide with things to do in London during your first visit: day 2

But first: what happened on day 1?

In part 1 of my 3-part London guide I shared my favourite city walk with you. During this scenic walk, which largely follows the river Thames, you’ll see the most famous sights in London. On day 2 I’m introducing you to the highlights in the lively city centre of this buzzing metropolis!

Shop till you drop

This might predominantly be a cultural travel blog, but let’s admit it. Shopping is definitely a must-do during a city trip, am I right? That’s why I’m starting this article with the best shopping hotspots in London where you could literally shop for hours (or days) at end!

As soon as you exit Oxford Circus tube station, you’re smack in the middle of London’s most famous shopping street: Oxford Street. If you’re a shopaholic, then you’re in luck! Because this is where you’ll find flagship stores of all the well-known high-street clothing shops. Especially the enormous Primark is very popular among (young) shoppers.

Do you however, like myself, prefer a quieter and ‘more adult’ shopping experience? Then the upmarket Selfridges is an absolute must-visit! This department store is the dream for all shoe-a-holics; it houses one of the world’s largest shoe departments!

Regent Street, right on a crossing with Oxford Street, is the second most prominent shopping street in Central London. Both sides of this long street are lined with dozens of shops. My personal favourites are Hamleys – the oldest and largest toyshop in the world – and designer department store Liberty. The Tudor-style building in which Liberty is located looks stunning and is worth a visit in itself.

Do make sure you walk through colourful Carnaby Street. It is located right next to Liberty, but looks completely different from all the surrounding streets. It almost feels like setting foot on the set of Austin Powers rather than walking around Central London. Yeah baby!

Vegetarian and vegan dining tips for Central London There’s certainly no shortage of dining options in Central London. But for vegetarians and vegans I’d recommend these two great restaurants: Ethos and Mildreds Soho. Even as a flexitarian, I find the food here is delicious!

Shopping tip 4: Head down to Mayfair and Marylebone for an exclusive shopping experience

Are you after more luxurious fashion and beauty brands? Then Mayfair – especially (around) Bond Street, New Bond Street, Moulton Street and Dover Street – is the perfect shopping destination for you! Here you’ll find shops such as Aesop, Chanel, Christian Louboutin, Gucci, Jimmy Choo and Victoria Beckham. And if you’ve seen the Kingsman films, you know that Savile Row is the place to go for a bespoke suit!

Truth be told that I unfortunately can’t afford shopping in Mayfair. But that doesn’t stop me from coming here to admire the extravagant window displays. (And obviously do a fair bit of people-watching.)

According to insiders, Marylebone has the ambiance of an English village rather than an area in the busy capital. It’s a picturesque and quiet area with a truly unique character. Here you’ll find dozens of designer boutiques, great restaurants and charming redbrick buildings. Make sure you at least visit Marylebone High Street, Marylebone Lane and St Christopher’s Place.

Piccadilly Circus is one of London’s most iconic locations. Although there’s not that much to do in this busy roundabout, it still attracts hundreds (or thousands even?) of tourists a day. Why? They all come here to see the bright LED billboard signs you see in postcards. And then there’s of course the world-famous statue of ‘Eros’. (Who isn’t Eros by the way, but his brother Anteros. Sorry, my inner nerd couldn’t help clearing up this common misunderstanding…)

The two liveliest squares in London

From Piccadilly Circus you can reach Trafalgar Square in just 10 minutes. This famous square is named after the historical Battle of Trafalgar. That’s where the British, under the command of Admiral Nelson, defeated Napoleon’s army in 1805. That’s why you can see a huge statue of Nelson in the square. It stands on top of the nearly 50m-tall Nelson’s Column.

No matter what day of the week or time of day you visit Trafalgar Square, there’s always plenty to see and do here. Judging by the numerous street performers, you know it’s one of London’s main tourist attractions. The location of two of London’s main galleries, the National Portrait Gallery and The National Gallery, obviously plays a great part in this. But the square is also located right in the middle of London’s theatre district and famous landmarks such as Buckingham Palace and Westminster Palace.

Curious to see where the Queen lives? From Trafalgar Square you could be in front of the Queen’s front door at Buckingham Palace within 20 minutes. This was the starting point for the ultimate sightseeing city walk in London that I described in part 1 of my guide with things to do in London.

Leicester Square is yet another famous square in London. This has always been the vibrant heart of London’s entertainment area. For some proper glitter and glamour you have to come down here for big film premières. If you come here early, you might be lucky to snap a selfie with some Hollywood stars as they walk down the red carpet.

Interested in seeing musical or theatre play whilst in London? Then join the queue at the TKTS ticket desk in Leicester Square in the morning. Not only they sell last-minute tickets here, they even often offer incredible discounts! Does chocolate sound more appealing to you than a visit to the cinema or theatre? Then a visit to the huge M&Ms World in Leicester Square might be more to your liking!

Head down to Soho for an extravagant night out

Right at the border of Leicester Square you find Chinatown. This exotic pocket in Central London is home to a great collection of Asian supermarkets and restaurants. My favourite restaurant in  Chinatown is Tokyo Diner. Here you can enjoy a simple yet delicious and authentic Japanese meal for great prices. Being Dutch, it’s great to see a Dutch pub, De Hems, right at the edge of London’s Chinatown!

Chinatown and Leicester Square are both located in the multi-cultural Soho area. Historically this was an upper-class residential area. Until it started its extreme decline that is. Nowadays Soho is mostly known for its extravagant nightlife scene and numerous  gay bars. Despite the area has been ‘cleaned up’ significantly over the years, it’s still a lively area and THE place to go for an unforgettable night out in Central London.

From convent garden to the first piazza in London

Today everybody knows Covent Garden as a picturesque and charming covered market hall, ideal for browsing shops and stopping for a snack and drink. But hardly anyone knows that this former fruit and vegetable market once stood on the grounds of a convent. The food grown in the garden used to stock the pantries of nearby Westminster Palace. You can still see this is the name Covent which is a corruption of the word convent garden. Pretty neat, eh?

By the 17th century they decided to revitalise the barren agricultural land. They built the first Italian-style square, piazza, in London on this former convent garden. This was the beginning of the popular Covent Garden as we know it today!

Peek inside the mysterious world of the Freemasons

Do you know what I enjoy most about London? Not so much its endless shopping possibilities or theatres. I’ve actually made it my ‘hobby’ to discover London’s obscure and secret side. And this is not that difficult. All you need to do is look a bit closer at the ‘hidden’ things that are actually staring you right in the face.

Take the Freemasons’ Hall for instance. Despite its impressive size, this huge white structure in the middle of Covent Garden stands almost completely invisible in one of London’s busiest streets. Not many people know that you could walk from Covent Garden market hall to England’s largest Masonic Lodge within a few minutes!

To improve their often rather mysterious image, the Freemasons have opened up the Freemason’s Hall to the public. They even give free tours almost every day. I did that once and it was incredible to get the chance to see what’s hiding inside this ‘white beast’ of a building. I highly recommend going on one of their tours!

The Occult and the perfect Insta location

The Masonic Hall isn’t the only mysterious location in the Covent Garden area. You would never expect it but the charming streets with their beautiful old warehouses around Seven Dials used to have mystical associations. Nowadays it’s a lively area, ideal for shopping and eating. But in the 17th century it was the place to go for anyone with an interest in alternative medicine, the occult and astrology. Why? Because of the layout of the seven streets. These not only form a star, but also have a large sundial in the centre. People therefore believed the Seven Dials area has some special spiritual energy.

Can you still notice anything about this as a visitor today? Not much at first as you mostly find lots of modern (shoe) shops and restaurants here. But if you have a closer look, you’ll discover the various natural health and alternative businesses here. The hidden Neal’s Yard is a perfect example. This colourful alternative courtyard makes for the perfect Insta location. Once you’re here, take a look around and see if you can spot the blue plaque for Monty Python!

Want to find more mystical locations in the area? Then head down to Watkins Books on 19-21 Cecil Court. This is one of the oldest and largest esoteric bookshops in the world. This shop is one of the reasons J.K. Rowling used this street as inspiration for Diagon Alley in the Harry Potter books!

Are you going to London for the first time soon? What are you most looking forward in seeing and doing there? Have a great time!
Zarina xx

Things to do in London day 2: save this article on Pinterest 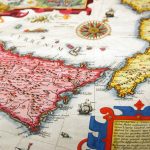 Off the Map: Confessions of a Map Lover