My Travel Highlights of 2018

While I’m already counting the days until my first trip of 2019, January is the perfect time to briefly look back on my travels in 2018. And when it comes to travelling, 2018 was a truly magical year. It was the year I walked through New Zealand’s jaw-dropping landscapes, visited centuries-old temples in Athens and enjoyed a cultural city trip to Antwerp. So here’s my 2018 travel review!

New Zealand had been right at the top of my travel bucket list for years. I was fortunate enough to be able to cross this long-desired travel destination off my list in 2018. For 3 weeks hubby and I marvelled at the curious volcanic landscapes, geysers, mountains, fjords, whales, dolphins, glow worms, waterfalls and some of the 3820 lakes there!

As much as I enjoyed visiting cities for a short break during our road trip, it was blissful to disappear back into nature afterwards. I have plenty of travel stories about our New Zealand trip in store for you, but for now you can read about our 3-day break in the capital city Wellington here:

Things to do in Wellington when it rains

New Zealand was a lot busier and also far more touristic than I expected. But still it managed to cast its spell upon me. I had high expectations and New Zealand did not disappoint. I was struck by its balance of beauty and raw power. And that is why we’ll be making that dreadful 36-hour long flight yet again this year. I wasn’t quite done with this fascinating country on the other side of the world just yet!

This destination may be a whole lot closer to home, but it was just as impressive. Ever since my childhood I’ve had a weakness for anything to do with Ancient Greece. I ‘blame’ my mum for this! As a young girl I’d sit there breathlessly, listening to her enticing stories about the ancient Greek, Roman and Egyptian gods. Now I’m an adult, my bookcase is filled with books about these ancient cultures, mythology and related topics.

I’ve always wanted to visit Athens so it’s actually a little odd that I’d never been there until now. It was exhilarating to finally stand on top of the Acropolis, the holy mountain dedicated to Athena, goddess of wisdom. I could almost feel the weight of history beneath my feet.

However, Athens is far more than an ancient city filled with temples dedicated to gods from yesteryear. It felt more like a city in motion, almost in revolt. Everywhere you look, you’ll see how the once stately villas are now completely covered in graffiti. It’s safe to say that Athens took me entirely by surprise.

Although some areas in Athens are in the process of gentrification, other areas display a more anarchic attitude. And this sense of anarchy is ever present in the city. In fact when it comes down to youth culture, Athens reminded me a lot of the following destination.

Last May I made my third visit to Berlin. I don’t know what it is with this city, but with each trip my love for it grows and makes me hungrier for more. And that is why our next city trip to Berlin for later this year is booked already!

I guess one of the things I love most about this city is that each neighbourhood is so completely different. On the one hand I enjoy walking through the broad streets of Mitte dwarfed by the grand and imposing German architecture. And on the other hand I feel really at home in graffiti-covered Friedrichshain. This is one of the many street art hotspots in Berlin!

Find out more about street art in Berlin here:

When I was still living in the Netherlands, Antwerp was just less than an hour away from me. So I would visit there every so often for the day just to go see a film in the enormous cinema, or have a proper Belgian beer in a local bar.

However, I hadn’t been to Antwerp for 7 years until last year. I really made up for this though by going there not only once, but twice in 2018! The first time was with Suzanne, who’s been my bestie for over 20 years now. Because we both were a little broke, we steered clear of the shops. (Despite the fact that Antwerp is mostly known as a fabulous shopping destination!) Instead, we bought two Antwerp City Cards, which offered us free access to tons of museums and tourist attractions. It was a really great investment and we got to see so much of the city this way! You can read all about our cultural city trip to Antwerp here:

City trip Antwerp: get your culture fix on a budget

Once again, I re-visited another old friend in 2018. I had been to this famous Spanish city twice before, but my last visit was already 6 years ago.

We went to Barcelona because of the music event Modular Day Barcelona where hubby performed live. Fortunately we also had plenty of time to go explore the city. Since we’ve both seen the most important sights already, we could now avoid going to these extremely busy touristy locations.

We stayed in an apartment that was part of the creative hub Hangar in the Sant Martí area. It’s basically a huge industrial building that houses several creative start-ups and artistic organisations. And to my great delight it was also a street art hotspot as you can see in the photo below.

2018 sure is a difficult year to top travel-wise. However, I do have some great destinations to look forward to in 2019 already. So far we’ve booked trips to Australia, New Zealand, Singapore, Cologne and Berlin. And as you can see 2019 is a year to return to some old personal favourites!

The rest of the year is still wide open for new adventures to be had abroad or within the UK. I’ve wanted to go on a road trip through England for years now. And I’m also very keen to explore the bordering countries Scotland and Wales. Despite the current unsteady political and social chaos in the world, our planet still has so much beauty to offer and I can’t wait to get out there and embrace it!

Have you also been fortunate to make one or more great trips in 2018? Or do you already have some fantastic trips for 2019 to look forward to? I’d love to hear about it in a comment below! Thanks, Zarina xx 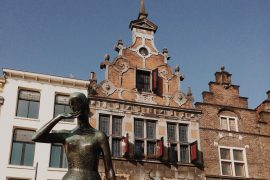 City Trip Antwerp: Get Your Culture Fix on a Budget